Home / What is Alcoholism? / Alcohol-Related Crimes / Alcohol and Domestic Abuse

Alcohol and domestic abuse are frequently paired. However, while alcohol is often involved in issues of intimate partner violence it is never the sole reason behind it.

The Tragedy of Alcohol and Domestic Abuse

If you suffer abuse from an intimate partner, please stop what you’re doing, and call The National Domestic Violence Hotline at 1-800-799-SAFE (7233). If you are Deaf or hard of hearing, you can still call using TTY 1-800-787-3224 or by video phone at 1-855-812-1001. There is someone available 24/7 every day of the year. They can help guide you out of a difficult situation, but you must make the first step yourself. You may also call if you are someone who commits abuse and doesn’t know how to stop.

What Is Domestic Abuse?

Domestic abuse, often referred to as domestic violence or intimate partner violence (IPV), is a pattern of behavior or behaviors used by one partner to maintain power and control over another partner that they are in a relationship with. Anyone, regardless of race, gender, sexual orientation, religion or age, can be a victim or perpetrator of domestic abuse. Abuse can be physical, sexual, emotional, mental, social and financial. Common tactics that an abusive partner uses to keep their victim in the cycle of an abusive relationship are:

To be perfectly clear, alcohol and alcoholism are never a sole trigger for, or cause of, domestic abuse. Rather, they are compounding factors that could eventually trigger intimate partner abuse in a violent individual. There is a misconception that when someone is an alcoholic who commits domestic abuse becomes sober they will no longer be abusive or violent. While reclaiming their sobriety can put a stop to regular abuse, that does not solve the core issue. Rather, it buries it under that person’s own shame and guilt but can still come out later in time. Only by fully confronting the underlying reasons for the abuse, can someone who abuses their partner be treated. 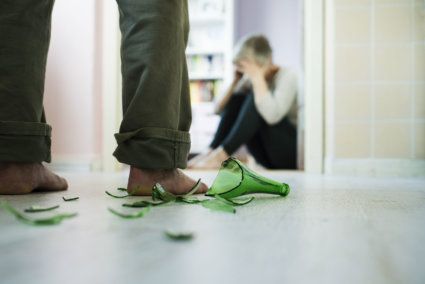 While there is much debate as to whether alcohol can be a lone trigger in domestic abuse, it cannot be denied that it is statistically more likely to be involved than it isn’t. Two-thirds of victims of spousal abuse report that the perpetrator had been drinking at the time of the incident(s). This doesn’t just apply to the U.S. Global studies show higher odds of domestic abuse if one or both partners are dependent on alcohol. However, despite these damning statistics, it has been determined that rather than alcohol causing people to abuse their partners, it is just an overlap of two separate social problems.

If you are someone who is having issues with domestic abuse or intimate partner violence, and believe alcohol plays a role, getting treatment for alcoholism may be an advisable first course of action. From there, one can get the root of issues related to the need for power and control which led to a cycle of domestic violence and alcoholism. If you’re not sure where to turn, you can call the National Domestic Violence Hotline listed at the top of the page, or you can reach out to a dedicated treatment provider. They can help you find the best treatment for alcohol dependence, and get you on your first steps to sobriety.

Previous PageDrinking and Driving (DUI) Next Page Minor in Possession