Can Drinking Make You Fail Your Exams?

The prevalence of alcohol abuse among college students is not a new story. While non-students of the same age drink alcohol more regularly, college students drink much larger amounts when they do drink. These days, approximately 20% of university students meet the criteria for an alcohol use disorder (AUD). Moreover, 1 in 4 students reported suffering some form of academic consequence (i.e. missing classes, falling behind in a class, low exam or paper grades) as a result of excessive drinking. However, the extent of alcohol abuse on academic performance continues to be a hotly debated topic in the field of addiction.

While the negative effects of alcohol on the brain and liver are well-documented, its effects on students’ academic and social lives are still being measured. Previously, researchers believed alcohol abuse and academic struggles were overtly linked. Yet, recent studies show that the bulk of consequences from drinking relate to motor function, attention span, and mood. Alternatively, poor test scores or failing classes is a more typical problem among heavy drinking students with co-occurring mental health issues or other peripheral personal problems. When combined with drinking, anxiety can contribute the most to poor academic performance. Stress and alcohol can lead to such difficulties that students may be unable to function normally in the college atmosphere.

Each year, 1,825 students die as a result of alcohol-related injuries.

37.9% of students between 18 and 22 years-old self-reported binge drinking in the past month.

34% of students reported experiencing between 12 and 51 hangovers each year.

One study, published in the Addiction journal, took a close look at the relationship between drinking and students’ academic performance. Instead of measuring only the amount of alcohol consumed by students and how many of those students experienced negative academic consequences, the study focused on next-day consequences. After drinking to a level of .12 BAC (.08 being the legal limit), results showed that students’ exam scores were not significantly different than when they were sober the night before. In fact, only students’ motor skills (i.e. walking) and mood were measurably impacted. Mood, particularly anxiety, was found to be the single biggest concern reported by students following episodes of heavy drinking.

Furthermore, the study found that students’ perception of their own academic performance rated lower the day after drinking, compared to non-drinking days, even when there was no significant difference in exam scores. These results are supported by another study done by Illinois Wesleyan University, affirming the link between student stress and drinking. 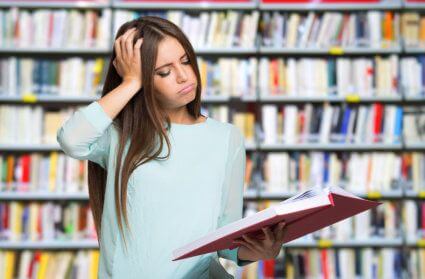 Like other substances of abuse, alcohol is commonly used as a coping mechanism. Thus, those with high levels of anxiety sensitivity are more likely to turn to drinking during times of high stress – i.e. exams. Interestingly, the Illinois study found that the mere perception of an oncoming high-stress event contributed to heavy drinking, even when students had prepared (i.e. studied for a test). Rates of heavy drinking were also more likely to spike following high-stress events. Studies like these have helped demonstrate how early drinking habits can lead to an AUD throughout an individual’s life.

Binge drinking for college students is not just an issue for their health and grades. Excessive drinking has been linked to sexual assault, injury, traffic deaths, and other alcohol-related crime.

You Don’t Have to Be Stressed

Though many consider heavy drinking to be part of a normal college experience, habits like this can be extremely detrimental to the rest of your life. Not only are you at a greater risk for developing a dependence and addiction to alcohol in your twenties, you increase your chances of alcohol-related injury and death. If you think you may have an alcohol addiction, reach out to a dedicated recovery professional today for information about treatment options.

My loved one is addicted.

Knowing the right approach can be hard. We’re here to help.

Help a loved one end their alcohol addiction