Home / How the Shape of Your Glass Influences Alcohol Consumption

How the Shape of Your Glass Influences Alcohol Consumption

Can the Shape of Your Glass Affect Your Drinking Habits?

In the United States, binge drinking is the most common and dangerous pattern of excessive alcohol use. Binge drinking is defined as the consumption of an excessive amount of alcohol in a short period of time that brings an individual’s blood alcohol concentration (BAC) to 0.08 or more. The speed at which we consume alcohol depends on a variety of factors. However, according to new research from the University of Bristol, a major contributing factor behind how quickly we down an alcoholic beverage may be because of the shape of the glass that we’re holding.

Two studies presented by Bristol’s Tobacco and Alcohol Research Group at the 2015 British Psychological Society Annual Conference demonstrated just how influencing the shape and size of a glass can be on drinking habits. To test the theory of whether there’s actually a correlation between the two, Dr. Angela Attwood from the University of Bristol recruited a total of 160 men and women, aged 18-40 with no history of alcohol problems, to attend two experimental sessions.

In the first session, the study participants were given glasses of either a beer or a non-alcoholic soft drink, served from either a straight-sided glass or a “fluted” glass with a curvy taper to a narrow base. Those drinking beer from the curved glass finished their drinks nearly twice as fast as the participants drinking the alcohol from the straight-sided glass. There was, however, no difference in soft drink consumption rates.

In the second test, the participants were asked to look at images of the two types of glasses with varying volumes of liquid and asked whether they thought they were more or less than half full. The results showed that there was a greater degree of error when it came to judging levels in the curved glasses. This degree of error was also associated with drinking speed — the volunteers who had more trouble judging the amounts in the glasses also had the greatest changes in drinking rates.

Dr. Attwood and her colleagues attribute the tests’ outcomes to the fact that it is more difficult to gauge the halfway point in the curved glasses compared to the straight glasses. The shape of the curved glasses distorts the drinker’s perception of how much is being consumed and how much is left in the glass compared to the straight-sided ones. Without the equal marker, it may be hard to judge just how much you’ve actually drank. “People often talk of ‘pacing themselves’ when drinking alcohol as a means of controlling levels of drunkenness, and I think the important point to take from our research is that the ability to pace effectively may be compromised when drinking from certain types of glasses,” Attwood says.

What Is a Standard Drink?

Dr. Attwood’s research also showed that drinking different types of alcohol, such as beer vs. malt liquor, within the curved glasses led to higher consumption speeds as well. Although different types of alcoholic drinks contain varying amounts of alcohol, participants drank the same amount of malt liquor just as fast as participants that drank the same amount of beer when compared side-by-side. This is important to note as many people don’t realize how much alcohol they’re actually consuming in one sitting, therefore causing higher intoxication rates and alcohol-related injuries. According to the National Institute on Alcohol Abuse and Alcoholism, a standard drink is considered 5 fluid ounces of wine, 3 to 4 ounces of port or sherry, 12 fluid ounces of regular beer, or 8 to 9 fluid ounces of malt liquor. 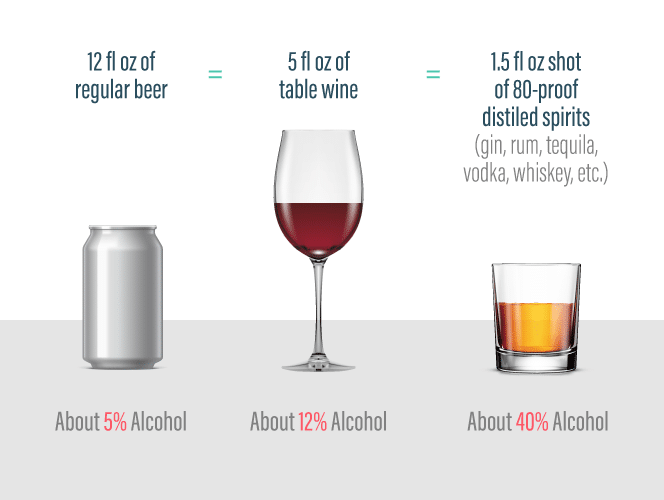 Knowing what a standard drink is and making small changes such as switching to a straight-sided glass can help individuals make more accurate judgments of the amount that they are drinking and help them drink at a slower pace.

Switch Your Glass and Monitor Consumption

Environmental factors such as the color, size, and shape of glassware can influence how we experience drinking. Specialty “fluted” beer glasses with curves may make the drink look more appealing, but it’s also been proven to trick bar patrons into thinking that they’ve drunk less than they actually have. Use tall, narrow glasses when drinking alcohol and actively monitor how much you’ve had to drink. Knowing the effect that glass shape can have on the speed at which you consume alcohol can help you pace yourself better the next time you’re out.

However, if you’re someone struggling with excessive alcohol consumption or binge drinking, simply changing the shape-ware of your glass may not be enough. If you or someone you love is battling an alcohol use disorder, contact a dedicated treatment provider to learn about available treatment options today.

My loved one is addicted.

Knowing the right approach can be hard. We’re here to help.

Help a loved one end their alcohol addiction