Home / What Is Alcoholism? / How Long Does Alcohol Stay In Your System?

How Long Does Alcohol Stay In Your System?

Every person processes alcohol at a constant rate of about one standard drink per hour. However, there are many factors that can influence how long an individual feels the effects of alcohol, including: age, gender, body composition, and overall health.

How Long Does Alcohol Stay In Your System?

How long alcohol stays in your system depends on a number of factors. A big concern that many people have after a long night of drinking is how long alcohol will remain in their system. It takes time for alcohol to be processed by the body. On average, it takes about one hour to metabolize one standard drink. In terms of determining exactly how long alcohol is detectable in the body depends on many factors, including which kind of drug test is being used.

Reach out to a treatment provider for free today for immediate assistance.

How The Body Processes Alcohol

The body follows a pretty straightforward process when digesting and metabolizing alcohol. Therefore, the amount of time that a drink will stay in someone’s system has more to do with how much a person drinks than any other factor.

Once swallowed, alcohol enters the digestive system and travels to the stomach and small intestine. Approximately 20% of alcohol is absorbed through the stomach, and most of the remaining 80% is absorbed in the small intestine, then directly to the bloodstream. Once in the blood, alcohol is rapidly transported throughout the entire body, which is why alcohol impacts so many different bodily systems. Most of the alcohol that enters the body eventually ends up in the liver, where the vast majority of alcohol metabolism takes place. In general, the liver can process one ounce of liquor (or one standard drink) in one hour. If an individual consumes more than this, the system becomes saturated, and the additional alcohol will accumulate in the blood and other tissues until it can be metabolized. If this happens too many times or too fast, damage to the brain and tissues of the body can develop.

The human body is very effective at processing alcohol, provided that alcohol is not consumed so quickly as to cause alcohol poisoning. It is estimated that between 90% and 98% of all alcohol that enters the body is metabolized and absorbed. The remaining alcohol is then expelled from the body through sweat, urine, vomit, and feces.

The percentage of alcohol that is in a person’s bloodstream is known as the Blood Alcohol Concentration (BAC). BAC is usually expressed as a percentage of ethanol that is present in the blood in units of mass of alcohol per volume. For most people, one ounce of alcohol will produce a .015% blood-alcohol concentration. This means someone with a .015% blood-alcohol level will have little to no alcohol in their bloodstream after 10 hours have passed. It’s important to note that the more you drink, the longer alcohol stays in the system.

Once a person’s blood-alcohol levels go above .05% to .055%, alcohol’s negative effects start to increase. So feelings of calm, happiness, and relaxation start to turn into depression, irritability, and disorientation. At around .08% to .09%, sense of balance is off and motor skills are impaired. Some people may also begin vomiting at this level due to excess alcohol in the blood and the body’s inability to metabolize the alcohol fast enough. In the United States, someone is considered to be legally intoxicated and prohibited from driving a vehicle if their BAC level is 0.08% or greater.

Factors That Affect the Rate That Alcohol Is Processed

Alcohol is metabolized at a constant rate, but some people may feel the effects of alcohol for longer amounts of time. That’s because blood alcohol concentrations can fluctuate among people for a variety of the following reasons:

The older a person is, the longer alcohol stays in the liver before it moves into the general bloodstream or is metabolized – increasing length of intoxication and risk of damage to the liver. The amount of water in the body also goes down with age, contributing to a higher BAC. An older person is additionally more likely to be taking medication and this affects the liver as well. All of these factors mean that alcohol is processed by the body at a slower rate.

Due to several physiological reasons, alcohol is metabolized differently by women than it is men and will stay in a woman’s system longer. This is largely due to the fact that women tend to have a higher percentage of body fat and lower percentage of body water compared to men. This means that a man’s body will automatically dilute the alcohol more than a woman’s, even if the two people are the same height and weigh the same amount. Hormone levels also affect the body’s ability to process alcohol, and women will experience higher BACs drinking alcohol right before menstruation. Studies have additionally shown that women have less acetaldehyde dehydrogenase, the enzyme used to metabolize alcohol in the stomach.

Eating a meal and having food in the stomach prior to drinking can have a powerful influence on the absorption rate of alcohol. Food helps dilute the alcohol and slow the emptying of the stomach into the small intestine, where alcohol is rapidly absorbed. Peak BAC could be as much as 3 times higher in someone with an empty stomach than in someone who has consumed food before drinking. Eating regular meals and having snacks while drinking can help induce enzyme activity in the liver and slow the rate at which alcohol is absorbed.

A person’s body size and composition are also factors that can impact how fast alcohol is processed. Low-water fatty tissue cannot absorb alcohol to the extent that high-water muscle tissue can, meaning individuals with more body fat generally have higher BAC. Correspondingly, an individual that is extremely muscular but of shorter stature will have a higher BAC than someone taller than them of the same composition.

Certain medications can interact with alcohol and alter the metabolism, thereby affecting how the body is able to process alcohol. Some medications slow the emptying from the stomach into the small intestine and liver, causing the alcohol to be rapidly absorbed. This results in higher BAC levels and intoxication that affects the body more quickly. Medications that are specifically known to interact with alcohol include:

What Is A Standard Drink?

People often underestimate how much they have had to drink because they aren’t using standard drink measurements. One standard drink is equal to one 12-oz beer, 1.5 ounces of liquor (whiskey, vodka, etc.), or a 5-oz glass of wine. 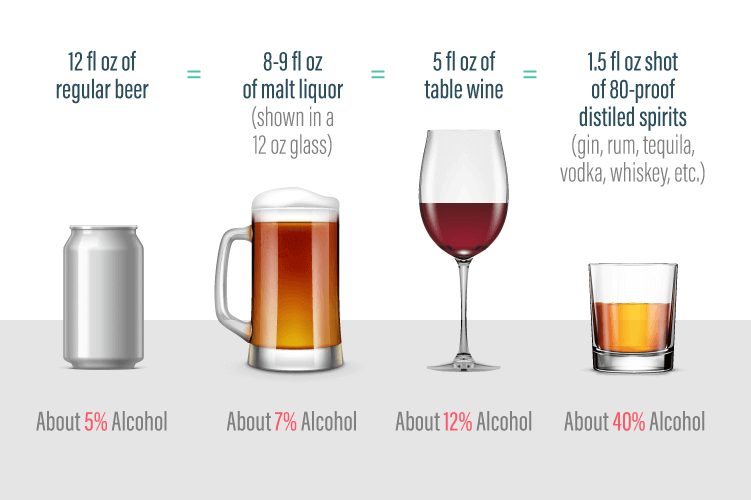 Understanding BAC and the rate that alcohol is metabolized by the system can help prevent the dangerous consequences of excessive alcohol consumption. However, if you’re someone who struggles to drink safely and in moderation, it may be time to seek professional help. Contact a treatment provider today to learn about rehabilitation options.

Previous PageEffects Of Alcohol Next Page Is Alcohol A Drug?

Connect with a treatment provider 24/7. All calls are free and confidential.

Help your loved one by contacting a treatment provider today.

We’re here 24/7 to help guide you or your loved on through rehab and recovery. Submit your number to receive a call today from a treatment provider.