Alcoholics Anonymous is the largest and oldest alcohol support group in the world. The organization is dedicated helping members overcome alcoholism.

What Is Alcoholics Anonymous (AA)?

Alcoholics Anonymous (AA) is a worldwide organization designed to help former alcoholics support one another throughout their recovery journey while maintaining their sobriety. The organization was founded in 1935 by Dr. Bob Smith and Bill Wilson in Akron, Ohio. Today, AA groups can be found in cities across the United States and around the world. Meetings are open to people of all races, ages, and genders, including the family members of recovering alcoholics.

Individuals who attend AA groups are committed to stop abusing alcohol and remain sober. The meetings offer a multitude of ways to support ongoing recovery, like an effective 12-step program designed to treat alcoholism. The 12 traditions of AA were intended to stabilize the program and keep it freed from outside influences. Since the organization is considered a mutual-aid fellowship, it is run by former alcoholics who help those currently in recovery.

Get professional help from an addiction and mental health counselor from BetterHelp by phone, video, or live-chat.

Online therapy can help you with long term addiction support. Connect with a therapist from Calmerry anytime, anywhere.

Get matched with a therapist now.

The History Of AA

AA was originally founded on the principles of the Oxford Group, a Christian-based self-help group. Initially, founder Bill Wilson did not have much success in helping those struggling with drinking problems get and remain sober. It was suggested that Wilson pay more attention to the scientific aspects of alcoholism treatment rather than the Christian elements of recovery. Soon after, Wilson traveled to Akron, Ohio, where he met a man who was having trouble remaining sober – Dr. Robert Smith. Wilson worked with Smith for 30 days until he gave up drinking on June 10, 1935. This is now the official anniversary date of AA across the globe.

For a while, Dr. Smith and Wilson worked under the umbrella of the Oxford Group. However, they were often criticized for their practices. By 1937, they broke away from the Oxford Group and started AA. Although Dr. Smith and Wilson kept several elements of the Oxford group, such as holding informal gatherings, going through steps and working for no income, they made many changes. The addition of AA steps, meetings and sponsors has helped the organization become recognizable as an effective support group to millions of people worldwide.

The Organization Of AA

AA is not run by a leadership team, but rather, by members who are former alcoholics with a desire to help others. This organizational structure has been tremendously successful for AA and its more than two million members. Annually, AA continues to increase its number of chapters around the world and currently has more than 100,000 groups.

Each AA group is self-run and relies on donations to cover various expenses. Some AA groups have committees in which members take on service positions for a brief period of time – typically several months to two years. At the end of a position’s term, members will vote on a new person to serve. The rotation of positions allows individuals to be as active as they want to be within their chapter. 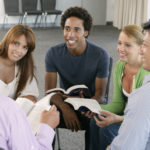 According to a 2014 AA membership survey, 27% of members have been sober less than a year. After more than 20 years, 22% have remained sober. 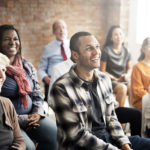 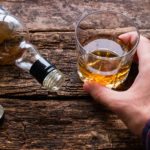 AA was awarded the Lasker Award in 1951 for the organization’s unique and highly successful approach to alcoholism.

Every individual who takes part in an AA group is advised to read the Big Book, the bible of the organization. The Big Book provides stories of inspiration and recovery resources that will help you on your journey to achieving long-term sobriety. In it, the book explains both the 12 steps and 12 traditions of AA. As you move to the second half of the book, you will find personal stories from those who have overcome an AUD. Additional stories are added each time a new edition of the Big Book is released. These are relatable for many people in recovery and serve as hope and motivation to maintaining sobriety.

The 12 traditions of AA serve as the foundation of the organization. Because of these, members are able to rest assured that AA is a safe place to share their experiences and get support for their alcohol use disorder (AUD).

Here is a breakdown of the 12 traditions of AA:

2. For our group purpose there is but one ultimate authority—a loving God as He may express Himself in our group conscience. Our leaders are but trusted servants; they do not govern.

3. The only requirement for AA membership is a desire to stop drinking.

4. Each group should be autonomous except in matters affecting other groups or AA as a whole.

5. Each group has but one primary purpose—to carry its message to the alcoholic who still suffers.

6. An AA group ought never endorse, finance, or lend the AA name to any related facility or outside enterprise, lest problems of money, property, and prestige divert us from our primary purpose.

7. Every AA group ought to be fully self-supporting, declining outside contributions.

9. AA, as such, ought never be organized; but we may create service boards or committees directly responsible to those they serve.

10. Alcoholics Anonymous has no opinion on outside issues; hence the AA name ought never be drawn into public controversy.

11. Our public relations policy is based on attraction rather than promotion; we need always maintain personal anonymity at the level of press, radio, and films.

12. Anonymity is the spiritual foundation of all our Traditions, ever reminding us to place principles before personalities.

Reach out to a treatment provider for free today for immediate assistance.

The 12 steps of AA discuss how to recover from alcoholism and prevent triggers. Oftentimes, they are introduced in an inpatient rehab setting and are used in aftercare recovery programs. The 12 steps are relevant to many different situations and can help during the good and difficult times.

1. We admitted we were powerless over alcohol – that our lives had become unmanageable.

2. Came to believe that a Power greater than ourselves could restore us to sanity.

3. Made a decision to turn our will and our lives over to the care of God as we understood Him.

4. Made a searching and fearless moral inventory of ourselves.

5. Admitted to God, to ourselves and to another human being the exact nature of our wrongs.

6. We’re entirely ready to have God remove all these defects of character.

7. Humbly asked Him to remove our shortcomings.

8. Made a list of all persons we had harmed, and became willing to make amends to them all.

9. Made direct amends to such people wherever possible, except when to do so would injure them or others.

10. Continued to take personal inventory and when we were wrong promptly admitted it.

11. Sought through prayer and meditation to improve our conscious contact with God as we understood Him, praying only for knowledge of His will for us and the power to carry that out.

12. Having had a spiritual awakening as the result of these steps, we tried to carry this message to alcoholics and to practice these principles in all our affairs.

Get professional help from an addiction and mental health counselor from BetterHelp by phone, video, or live-chat.

Online therapy can help you with long term addiction support. Connect with a therapist from Calmerry anytime, anywhere.

Get matched with a therapist now.

Take Your Life Back

If you’re interested in support groups like Alcoholics Anonymous, don’t wait to get started. Aftercare treatment programs reduce your risk of relapsing and are great ways to meet and find support from others in recovery.

Reach out to a treatment providers today to learn more.

Connect with a treatment provider 24/7. All calls are free and confidential.

Help your loved one by contacting a treatment provider today.

We’re here 24/7 to help guide you or your loved on through rehab and recovery. Submit your number to receive a call today from a treatment provider.